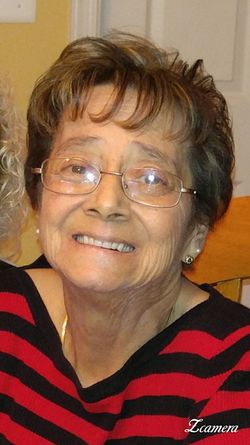 Alberta May Norris, aged 69, passed away peacefully on March 11, 2017 at home after a long and valiant battle with cancer that began in 2004. Alberta was a longtime resident of Philippi, West Virginia before moving to Stafford, Virginia in the fall of 2000 to be near her three daughters, all of whom were residing in Northern Virginia at the time. Alberta was born March 1, 1948, in Detroit, Michigan, the daughter of Harley and Clara Kennedy Mayle and grew up in Columbus, Ohio.

There is no denying that her great “grandbabies” as she called them, were her heart and joy. She thoroughly enjoyed spending time with her three great grandchildren known to them as Nan-Nan; Logan and Aria Johnson and Lyanna Johnson, all residing in Florida.

She had a strong spirit and work ethic and in addition to raising three children on her own after Sam’s early passing, she was a loving caregiver and housekeeper to many of the elderly in and around the Philippi area.

Family and friends were Alberta’s passion and delight and she will be remembered fondly for her ability to bring people together. There was no stranger at Alberta’s table and would feed anyone who came to her door. She had organized countless family reunions as well as BBQs and holiday spreads. She enjoyed farm-to-table style cooking, gardening, birdwatching (nature) and traveling.

Although cut way too short, Alberta led a flourishing life. She liked to travel and enjoyed seeing places she had only dreamed of as a child. Places like Ireland, Italy, Alaska, Hawaii, Canada, Mexico and the Caribbean. More recently she liked spending her evenings playing bingo and cards with her friends at Gardens of Stafford retirement community where she resided.

Her strong will to live, unwavering faith in God, and the love and prayers of family, friends, and many supporters carried her through her long journey of fighting cancer.

Friends will be received at the Wright Funeral Home 220 N. Walnut St. Philippi on Saturday March 18, from 11 am – 2 pm. A celebration of her life will be held at 2 pm with Pastor Geneva Mayle officiating. Interment will follow in the Pritchard Cemetery.