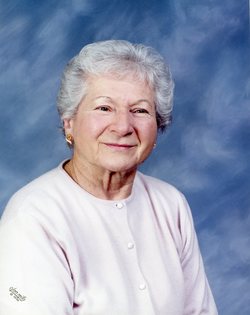 Anna was an active leader for many years in the Galloway community and in her church, St. Elizabeth Catholic Church, Philippi, WV. For 15 years she was the Avon representative in the Galloway area and especially enjoyed the many lifelong friendships it brought her.

The family will receive friends at Wright Funeral Home, 216 N. Walnut St., Philippi, WV, on Sunday, August 26, 2012, from 5-7:30 p.m.; a prayer service will follow at 7:30 p.m. A Mass of Christian Burial will be celebrated at 11 a.m. on Monday, August 27 at St. Elizabeth Roman Catholic Church, Philippi; the Fr. Jim O’Connor as celebrant. Interment will follow at The Bridgeport Cemetery, Bridgeport, WV. Memorial contributions may be made to St. Elizabeth Catholic Church, Philippi, WV 26416.

Monday August 27, 2012, 11 am at St. Elizabeth Catholic Church
Click for Map and Directions