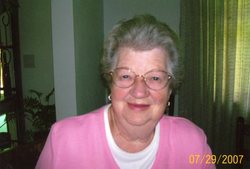 Deloris Irene (Casto) Goodwin Sponaugle, age 86, a resident of Berryburg Community in Barbour County, passed away unexpectedly Friday April 17, 2015 at Broaddus Hospital. She was born May 12, 1928 in Barbour County a daughter of the late Bovy and Neva Virginia (Malcolm) Casto. She was twice married first on July 30, 1966 to Donald L. “Red” Goodwin who preceded her in death on December 9, 1987 and second on August 4, 1995 to Calvin Sponaugle who preceded her in death on October 8, 1998. Surviving are two sons,
Lloyd Benny Casto and wife Patricia
Michael Ray Goodwin and wife Cindy both of Philippi

Deloris was preceded in death by one sister, Patricia Lee Haller, three brothers, Aubrey Eugene, Edmund Earl, and Jimmy Casto.
Deloris was a lifelong resident of Philippi; she was employed at GC Murphy’s and Grafton Apparel in Grafton. Deloris was a member of the Mary’s Chapel Church and one of Deloris’ greatest joys was spending time with her family.

Friends will be received at the Wright Funeral Home 220 N. Walnut St. Philippi on Sunday April 19, from 3-8 pm and on Monday April 20, from 8 am- 2 pm the service hour with Rev. Gary R. Phillips and Rev. Gina Stewart officiating. Interment will follow in the Harmony Grove Cemetery.