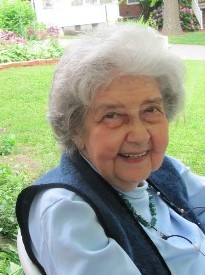 Eleanor Joan Smith Creed of Philippi, WV, passed away on Friday, June 1, 2018 at the age of 92 at her daughter’s home in Fuquay-Varina, NC. Eleanor was born February 16, 1926 in Elkins, WV to the late Mima Elizabeth Ward Smith and Howard Willis Smith.

Eleanor was an educator for twenty-three years after having received her Bachelor of Science and Master of Arts degrees from West Virginia University in 1947 and 1950, respectively. She taught at WVU; Fordson High School in Dearborn, Michigan; and Marshall Junior High School, in Marshall, Michigan. The majority of her years teaching were at Philip Barbour High School and Barbour County Vocational Center in Philippi, WV. The culmination of her career was working in the alumni department at Alderson Broaddus College where she had attended as a student prior to studying at WVU.

In addition to her academia work, Eleanor helped her husband, Johnny, operate the four Creed Oil Company stations. Eleanor also managed rental properties for Creed Enterprises until she retired in 2010.

Eleanor loved life and loved people. She always shared her smile and charming wit, brightening any room that she entered. She was caring and thoughtful, readily striving to help those in need.

Though Eleanor is dearly missed, we know she is in heaven joking with Jesus and dancing the jitterbug with Johnny!

Friends will be received at the Wright Funeral Home 220 N. Walnut St. Philippi on Wednesday June 6, from 6-8 pm the Order of Eastern Star will conduct services at 7 pm. Visitation will resume on Thursday June 7, from 8 – 11:00 am. Funeral services will be conducted at 11 am with Rev. Dr. Danny Franke. Interment will follow in the Mt. Vernon Memorial Cemetery.

Friends and family are then invited to gather at the Crim Memorial United Methodist Church’s fellowship hall for food and a continued celebration of her life.

In lieu of flowers, memorial donations may be made to the Philippi Presbyterian Church 147 Norris Ridge Rd. Philippi WV 26416 or the charity of your choice.