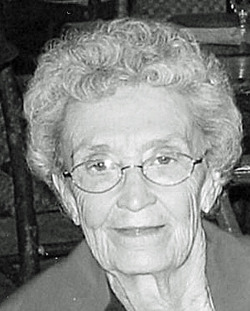 Jean was born on Becky’s Creek near Huttonsville, WV on March 21, 1926 to John and Reba Rosencrance Bell. She was raised on the family farm with her three sisters and one brother. She graduated from Tygarts Valley High School in 1944. After graduation she enrolled in nursing school at Davis and Elkins College and shortly thereafter met her husband (on a blind date) who had just returned from WWII. They married on February 7, 1946 and lived in Akron, Ohio for the first three years of their marriage and then returned to WV.

While raising their three children Jean worked at the Myers Clinic in Philippi as a medical assistant. She also worked at Broaddus Hospital in the admissions office and retired in 1986. Upon retirement Jean and John traveled often to see their children and friends. They enjoyed trips to Europe, Canada and all around the United States. They often said those were some of the best years of their lives.

Jean loved her family and she and John were blessed to have 70 years together. She was a wonderful wife, mother, sister, grandmother and great-grandmother.

The family would like to thank all of the special caregivers who gave love and support to our parents during their time in Kentucky, especially Ruth Helm, Linda Peterson, and Theresa Barnett.

Friends will be received at the Wright Funeral Home 220 N. Walnut St Philippi WV on Saturday February 18 10:30 – 12:30. The funeral service will be conducted at 12:30 by Evangelist Ron Laughery and Stan Jenkins with interment to follow in the Barbour Memorial Cemetery.