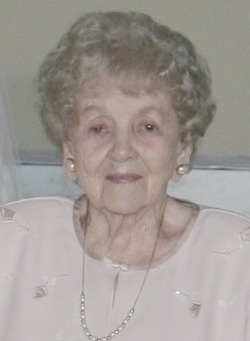 Elizabeth Eleanor Mockler Bush, 103 years old of Philippi, WV departed this life on Sunday January 8, 2017 at the Madison Nursing and Rehabilitation Center in Morgantown. She was born July 1, 1913 in Mannington, WV, daughter of Robert Emmett Mockler and Alberta Caroline Baumgartner Mockler. She will join her husband Dr. A. Kyle Bush, who preceded her in death. Those left to cherish her memory are her son, Dr. Robert K. Bush (and Betty) of Madison, Wisconsin and her daughter, Caroline Esposito (and Pat) of Morgantown; five grandchildren, Patrick Esposito, Beth Bush Doby, Cara Marie Esposito Kendzerski, Catherine Bush Gainey, and Sarah Bush Short; eleven great-grandchildren, and one great-great-grandchild and a host of other relatives and many friends.

In addition she was preceded in death by two brothers, William E. Mockler and Robert P. Mockler.

She attended West Virginia Wesleyan College and earned a Bachelor’s degree in Zoology from West Virginia University and then a Master’s Degree in Botany from The Ohio State University. She lived most of her adult life in Philippi, WV where she was an active member of the Philippi Crim Memorial United Methodist Church. She was an advocate for the WV Nature Conservancy. She was a member of the Brooks Bird Club, Barbour County Country Club where she was an avid golfer, Chapter C PEO, Daughters of the American Revolution, Order of the Eastern Star, Pi Beta Phi Sorority, Arkateean Club, and the American Association of University Women. She published an extensive book on the wildflowers of Barbour County and had been recognized as a West Virginia writer with numerous published poems.

The family wishes to thank all of the many excellent caregivers she had in Morgantown. She received outstanding care and an outpouring of love from the tremendous staff at The Madison during the past few years.

Friends will be received at Crim Memorial United Methodist Church 220 Pike St. Philippi on Thursday January 12, 2017 from 12:30-1:30pm. Funeral services will be held at 1:30 pm with Pastor Sam Haught officiating. Interment will follow in the Mt. Vernon Memorial Cemetery in Philippi, WV. In lieu of flowers the family requests donations be made to the Crim Memorial United Methodist Church, 200 Pike Street, Philippi, WV 26416 or the WV Nature Conservancy, PO Box 1432 McMurray, PA 15317