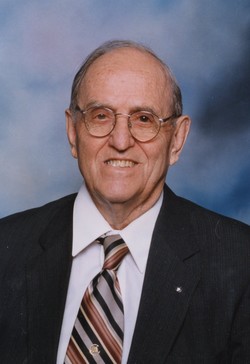 Elza V. Wilson, age 91, of Philippi, WV passed away Wednesday April 11, 2012 at Rosewood Nursing Home in Grafton, WV where he had been a resident for the past 4 years. Elza Wilson was born on June 21, 1920 at Belington, WV a son of the late Hurshel P. and Maude (Zirkle) Wilson. On June 9, 1944, he married the late Nola Brady in LaCross, WS. Nola passed away August 9, 1999. Elza is survived by one son, Mickey Wilson of FL, Rev. Mrs. Mike (Bonnie) Starkey of Jane Lew, WV, and Mrs. Brian (Arnetta) Hatfield of Grafton, WV. Surviving are five grandsons, Sean and Daniel Wilson, Michael Starkey Jr., Chris Starkey and Jason Hatfield, one granddaughter Rebecca Bolner, and 2 great grandchildren and 2 step great grandchildren. Elza was born a twin to the late Virginia Brooks. His sisters Mildred Helton and Fannie Eileen Cook are the last siblings of a family of ten.
Mr. Wilson served in the US Army from 1939-1945 as sergeant in charge of a 16 anti-air craft search crew. He worked for the Ralph B. Swiger Co. from 1946-1962. He owned and operated the Wilson’s Furniture Center in Clarksburg and Nutter Fort from 1963-1975. He was very active in the UM Church and Methodist Conference, an active member of the American Legion since 1949 serving as officer nad commander at various times. the Loins Club, and a board member of the Heart and Hand House in Philippi. He was one of the founders and past president of the Mt. Food Bank in Gassaway. Elza had served as president of the Univeristy of Hard Knock at AB College from 1986-approx. 2004. In 1985 he was awarded an Honorary Doctor of Letters by the Triune Bible Institute and Seminary and in 1996 he was awarded an Honorary Doctorate of Public Service Degree.

Upon retirement in 1975 he dedicated numerous hours to the community. For his service he was awarded numerous awards. Elza was also a member of the Gideons of Barbour County and Crim UM Church in Philippi, and American Legion Post 44 in Philippi. Elza and Nola Wilson restored the Campbell Schoolhouse which he attended as a child. It is currently on the campus of AB College.

Friends will be received at the Wright Funeral Home 216 N. Walnut St. Philippi on Friday April 13, from 4-8 pm and on Saturday April 14, fro 8 am – 1 pm the service hour with Rev. Bonnie Starkey and Rev. Tim Bleigh officaiting. Interment will follow in the Mt. Lebanon Cemetery with military rites being accorded. In lieu of flowers memorial contributions may be made to the Elza V. Wilson Scholarship Fund o/c Advancement Office Box 2154 AB College 101 College Hill Dr. Philippi, WV 26146.