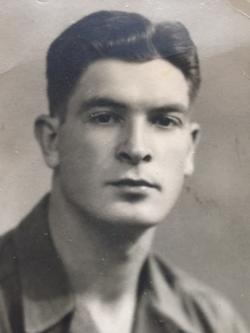 John C. Poling of Route 4 Philippi and most recently of Bowling Green, Ky died on May 7, 2016. John was born on June 3, 1922, the son of the late Opha D. and Ora Mae (Bosley) Poling. He graduated from Philippi High School in 1940. He worked in a defense factory in Baltimore, Md until he was drafted into the U.S. Army in February 1943.

John served as a platoon sergeant in Company D 10th Infantry Regiment, 5th Infantry Division of the 3rd Army in Europe during WWII. He received two Purple Hearts and a Bronze Star for meritorious service in combat.

After the war he returned home and married Eleanor Jean Bell of Huttonsville, WV on February 7, 1946. They recently celebrated 70 years of marriage. They spent many of their retirement years traveling in the U.S. , Canada and Europe.

John worked for the Scott Maytag Company in the appliance, plumbing, heating and LP gas business for many years. He became the manager of the Philippi Southern States in 1966 and retired in 1986.

Friends will be received at the Wright Funeral Home 220 N. Walnut St. Philippi on Friday May 13, from 6:00-8:00 pm and on Saturday May 14, from 8 -11 am. Funeral services will be conducted at 11 am with Evangelist Ron Laughery and Stan Jenkins officiating. Interment will follow in the Barbour Memorial Cemetery with military honors being accorded. In lieu of flowers memorial donations can be made to Adaland Development Inc. PO Box 74 Philippi, WV 26416, or Barbour Church of Christ 10429 Barbour County Highway, Belington, WV 26250.