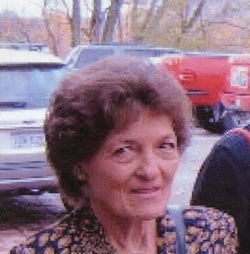 Mary Lou (Vuchetich) Skidmore age 88 a resident of Southview Ln. Philippi passed away on Saturday, May 30, 2015 in Talbott Personal Care Home. She was born December 8, 1926 in Ashland, WI a daughter of the late John and Myrtle (Timblin) Vuchetich. She was united in marriage September 20, 1946 to Paul Edward Skidmore who preceded her in death January 30, 2001. Surviving are children,

Mrs. Skidmore was preceded in death by three sisters; Beryl Jones, Shirley Tutalo and Phyllis Lacare.
Mrs. Skidmore was a homemaker and owner/operator of the first Sears Catalog Store in Philippi; she also worked as a secretary for Alderson-Broaddus College, Barbour County Health Department and North Central Community Action.

She enjoyed gardening, music, dancing, traveling and was an avid bowler.
She was a member of Crim United Methodist Church.

Friends will be received at the Wright Funeral Home 220 N. Walnut St. Philippi on Monday, June 1, 2015 from 6-8 pm and on Tuesday, June 2 from 8am-1 pm the service hour with Rev. Dr. Dan Unger officiating. Interment will follow in Mary’s Chapel Cemetery.