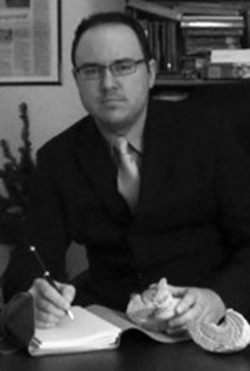 An evolutionary film theorist, newspaperman, and film consultant, Michael was driven by a great desire for learning. He was described by his closest friends as an amazing spark and a true intellect. He studied evolutionary theory at Cambridge University in England and Russian propaganda cinema at the University of Labor and Social Relations in Moscow, Russia. His study of the Russian language in his teen years spurred an interest in language, international affairs, and his ancestry. He will be remembered for his intellectual curiosity, sharp mind, and passion for film and research.

Born on January 30, 1980 in Fairmont, West Virginia, Michael was the son of Nicholas Michael Fonte and Patricia Ann (Green) Springer. He attended Fairmont Catholic School before he and his family moved to Shorewood, Illinois in 1992. He attended Illinois Math and Science Academy and returned to Minooka Community High School, where he was class president, in 1998 to graduate with his peers. While there, he wrote, produced, & hosted a CBS show in Chicago called, “Different Drummers.” He also interned at the International Field Museum of History in Chicago, Illinois and studied in a summer program at Georgetown University in Washington, D.C.

Michael went on to study at the University of Southern California’s School of Cinematic Arts where he earned his Bachelor’s degree. During his time there, he became a well-known expert in American politics and worked on the original McCain campaign. He co-founded United Leaders, whose mission was to inspire youths to pursue careers in political service and help them see politics as a means for social change. Michael then worked as a journalist in Joliet, Illinois and Martinsburg, Philippi, and Elkins, West Virginia and had a knack for investigative reporting. He continued on to Binghamton University in New York where he earned a Master’s degree in English with a concentration in evolutionary film studies. While there, he taught highly innovative interdisciplinary courses that used the evolutionary sciences to study film. Michael recently completed his PhD in English with a scholarly focus on evolutionary film studies from Binghamton University. Upon finishing his doctoral degree, Michael planned to return to California to continue work on his current project, Vandalia, with a storyline set in West Virginia. You can find some of Michael’s articles on his website, www.michaelgreenfonte.com.

Michael was preceded in death by both of his grandmothers, Susan Fonte and Geneva Green, and his uncle, Philip Green. He is survived by his father, Nicholas Fonte; mother, Patricia Springer; stepfather, Dean Springer; sister, Catherine Fonte Fahey, her husband, Michael, and their son, Cedar; sister, Christina Hillsberg and her husband Ryan; grandfathers Nick Fonte and Robert Green; aunt, Diana Craig and her husband, Kevin; uncle, Jim Green; and many other beloved extended family members.

Friends will be received at Wright Funeral Home 220 N. Walnut St. Philippi on Monday, December 7, 2015 from 5-8 pm and on Tuesday, December 8, from 8-10:30 am. A Mass of Christian Burial will be held at 11:00 am at St. Elizabeth Catholic Church with Rev. Fr. Jim O’Connor as celebrant. Interment will follow in the Mt. Olive Cemetery. In lieu of flowers, the family requests memorial donations in Michael’s name be made to E.O. Wilson Biodiversity Foundation at http://eowilsonfoundation.org/. http://www.forevermissed.com/michael-green-fonte/#about

Condolences may be expressed to the family at www.wrightfuneralhomeservices.com.