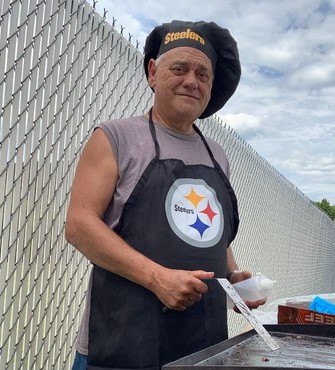 Robert Edward “Eddie” “Aka Bruce and Joe” Jones, age 60, a resident of Philippi, passed away Wednesday December 9, 2020 in the Ruby Memorial Hospital. Eddie was born March 23, 1960 in Philippi, a son of the late Richard E. and Helen Pearl (Gouer) Jones. Eddie was united in marriage on June 29, 1979 to Lorinda (Montgomery) Jones who survives at home. Also surviving is
Daughters, Pamela Louise Payne and husband CJ of Philippi
Topanga Jo Ann Jones of Philippi

Eddie was preceded in death by sisters, JoAnn Jones and Frances Jones.
Eddie worked as a store manager for Sheetz. He was an avid hunter and fisherman, he loved sports especially the Pittsburgh Steelers he would always watch them with his youngest daughter. Eddie enjoyed spending time with his family, he never met a stranger and enjoyed talking to people and was a master griller.

Friends will be received at the Wright Funeral Home and Crematory 220 N. Walnut St. Philippi on Sunday December 13, from 6-8 pm, Monday December 14, from 8am- 8pm, and Tuesday December 15, from 8 am- 2 pm. Funeral services will be conducted at 2 pm. Interment will follow in the Mt. Vernon Memorial Cemetery.