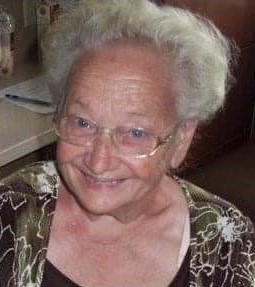 Rosemary Elizabeth Bowmar, age 91, a resident of Moatsville, passed away Thursday July 7, 2022 at her residence surrounded by her family.  Rosemary was born January 10, 1931 in Brownton, WV, a daughter of the late John George and Mary (Rusnak) Serback.  Rosemary was united in marriage on January 17, 1948 to Charles Marshall Bowmar who preceded her in death on May 6, 2015.  Surviving is son, John Christopher Bowmar and wife Patty Sue of Philippi, daughters, Dianna Karopchinsky and husband John of Moatsville, Anita Swisher and husband Van of Grafton, brothers, Paul Serback and wife Diane of Philippi, and David Serback and wife Mia of Florida, seven grandchildren, 11 great grandchildren, nephew whom Rosemary reared, William Serback and wife Nikki of Watertown, NY, close neighbor whom Rosemary considered her family Stephan Moats and wife Mindy of Moatsville, and several nieces and nephews.

Rosemary was preceded in death by grandson J.C. Bowmar, brothers, Michael, George, Richard, John Edward, Stephen, Joseph, and Robert Michael Serback, sisters, Betty J. Riley, Sandra Malackanich.  Rosemary worked for WV Plastics, Grafton Shirt Factory was a supervisor for a Tomato Plant in Flemington, and a seamstress for Reidboard Brothers.  Rosemary was a member of the St. Elizabeth Catholic Church, the St. Elizabeth A & R, Barbour County 4-H, Barbour County CEOS, the Republican Executive Committee, Barbour County Winter Fair.  She enjoyed making crafts, working in her garden which she strived for it to be the best around, was an avid farmer, and enjoyed cooking and opening her home to family and friends for the meals she would prepare.  Rosemary never met a stranger.  The family would like to thank WV Caring for their exceptional care and comfort they gave to Rosemary and family during her difficult time.

Friends will be received at the Wright Funeral Home and Crematory 220 N. Walnut St. Philippi on Monday July 11, from 5- 8 pm a wake service will be held at 7 pm on Monday. Visitation will resume on Tuesday July 12, from 8 am- 10:30 am at which time Rosemary will be moved to St. Elizabeth Catholic Church.  A mass of Christian burial will be at 11 am at St. Elizabeth Catholic Church with Fr. Babu Joseph as celebrant.  Interment will follow in the Tacy Crossroads Cemetery.  Condolences may be expressed to the family at www.wwrightfunerahomeservices.com