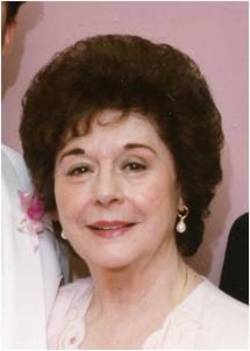 Virginia Joann Zubas, age 91, a resident of Century #1 died peacefully at her residence of natural causes on Saturday November 20, 2010. She was born on April 6, 1919 in Century, a daughter of the late Batista and Mary Marie (Mallai) Zara. She was united in marriage on July 4, 1937 to Peter P. Zubas, Jr. who passed away on July 1, 2004.
She is survived by one son, John David Zubas and wife, Christina of Santa Barbara, CA
one daughter, Rosemary Ives of Houston, TX.

Two grandsons, Vincent and wife, Patrice who have a son Samuel and daughter, Vanessa and live in Santa Barbara, CA; and Darren and wife, Angelina who have three daughters, Ashley, Sara, and Cheyana and live in Kennesaw, GA.

She is preceded in death by seven brothers Pete, James, Keno, Albert, Victor, Salvatore, Joseph, and one sister, Pauline Riley, Virginia was the last survivor of the Zara original family.

Virginia’s greatest joy’s were her family, special friends, her pets, and her commitment to her religion. She was a member of Our Lady of Sorrows Catholic Church in Century for most of her life, and upon its closing, became an active member of the Holy Rosary Catholic Church of Buckhannon, WV. She was also a member of the Ladies Auxiliary at St. Joseph’s Hospital for many years. She loved music, arts, and crafts such as stained glass and ceramics , and providing delicious Italian meals to both family and friends. She loved Polka music and enjoyed going to Polka dances with her “Pete”. She was also into annual canning of tomatoes and other vegetables from Pete’s garden.
After the passing of her “Pete” in 2004 Virginia remained in the family house in her familiar surroundings until her recent death. This would not have been possible without the dedication of a caregiver team led by Nancy and David Streets. The Zubas family will always be grateful for their leadership and the personal sacrifices they made to provide our Mother with the best care possible up until the time of her passing. Other notables who were part of the care giving “family” led by Nancy were Patty Cleavenger, Nina Payne, Sylvia Endrizzi and her sisters. There were others over the years that helped her and we thank them as well.

Friends will be received at the Wright Funeral Home 216 N. Walnut St. Philippi on Tuesday November 23, from 5-8 p.m. The rosary service will be recited at 7 p.m. A mass of Christian burial will be held at 10 a.m. on Wednesday November 24, at Holy Rosary Catholic Church of Buckhannon with Rev. Fr. Ronald Nikodem, and Rev. Fr. William Seli as celebrants. Interment will follow in the Mt. Vernon Memorial Cemetery.