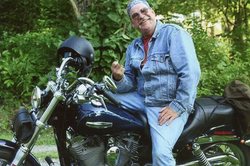 David Califf, 59, passed away on Friday at Geisinger Medical Center from injuries sustained in an accident on August 7 in Cass Township.

Born in Philippi, West Virginia, he was a son of the late James W. Califf, Sr., and Edith McCoy Califf. He attended Philip Barbour High School before joining the U.S. Army during the Vietnam Conflict. He worked at LaRosa Fuel and Badger Coal Co. He then worked as a mechanic-welder in power plant maintenance, working for Quail Ridge Construction Co., and Wheelabrator. He was last employed as a millwright through Local 2237 of the UBC Millwright Union, Lebanon. He resided in Schuylkill County for over 20 years. He enjoyed riding his motorcycle, camping and spending time with his family.

He was preceded in death by two brothers, James W. Califf, Jr. and Robert “Ace” Califf.

He is survived by his son, David Califf II (Teea), Heckscherville; three grandchildren, Hailey, Logan and Rainer Califf; a brother, John Califf (Judy), Philippi; a nephew, Chris Califf. He is also survived by many cousins, and his former spouse and close friend, Barbara Smith.

Friends will be received at the Wright Funeral Home 220 N. Walnut St. Philippi on Saturday August 30, from 12- 2 pm. A memorial service will be held at 2 pm with Rev. Francis McCoy officiating. Inurnment will follow in the Mt. Vernon Memorial Cemetery.